Anna Sward holds a PhD and is the founder of www.proteinpow.com – the fitness world’s number one resource for protein powder recipes. Besides uploading daily new content on her website, Anna is a columnist at bodybuilding.com and a writer at Muscle & Fitness magazines where she runs a monthly Protein Pow! cookery column. She recently released her first cookbook: Protein Pow(d)er: The Cookbook.

This recipe was originally published on Anna Sward’s website, www.proteinpow.com.

This is my first attempt at protein donuts (or doughnuts). I’ve always wanted to make protein donuts and now, what? Here they are! Oh, they turned out heavenly! Really cinnamony, soft, and airy :-). They’re actually small so 18 of them came out which is great because next week, when I get back to my gym, I’m going to throw some in a bowl of milk and eat them all at once postworkout >:-D. When they were ready, I covered them with melted 87% dark chocolate, using 5 squares to cover them all. Result? Waaa!! 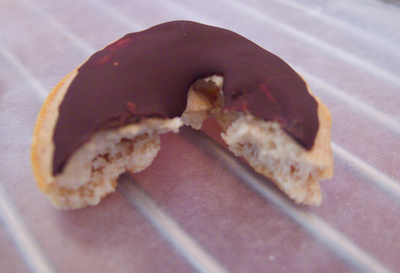 Blended together and baked in a donut tray. I bought myself this one for Christmas, it’s an 18-hole, silicone Savarine tray: super easy to wash and not at all expensive! You could also get a bigger one if, say, you wanted to make big donuts). Anyways, I just baked the batter for 35 minutes at 320 F (160 C).

That’s it. I let them cool, removed them from the tray, melted the chocolate in a bain marie, topped them with it, threw them in the freezer for 10 minutes and booooom! -> ready :-). Inside, they were very airy and donutlike. I think this is because, to not weigh down the dough (because who wants a literally heavy donut), I used lots of egg whites, threw in some whey in the batter, and used buttermilk in there too. All in all, I was really happy with how they turned out because they were, in fact, more like donuts than cake in texture so hoorah there. Anyways, you should totally get a donut tray and join me in making protein donuts! Let’s see… if you’re in the US, you can get this one, and, from the UK, this one (it IS for ‘giant donuts’ though… for regular donuts, there’s this too but it’s not silicone). Ah! I love it. Now, with this tray, I’m totally going to create all sorts of protein donut recipes. Ohhh! the fun :-). 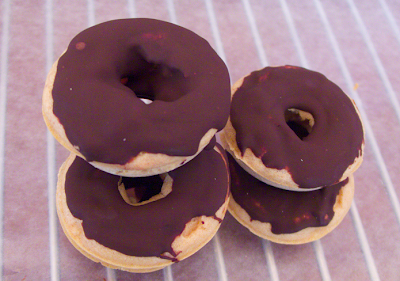